The party consisted of a Scavenger Hunt, where you could earn the Scavenger Hunt Stamp and collect a reward. Players could collect the 2nd Anniversary Hat at the Coffee Shop.

Alongside the party, the ANNIVERSARY2 code was released.

This party featured a Scavenger Hunt, allowing players to earn the Scavenger Hunt Stamp as well as collect an exclusive custom item. Players had to hunt around the island for party hats.

Town
Add a photo to this gallery

Snow Forts
Add a photo to this gallery 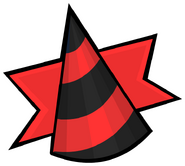 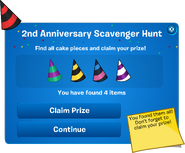 The interface
Add a photo to this gallery

Sneak Peek for the party, posted on Jonas' Twitter

The Promotional image for the party, posted on Club Penguin Online's Twitter

Retrieved from "https://officialclubpenguinonline.fandom.com/wiki/2nd_Anniversary_Party?oldid=99315"
Community content is available under CC-BY-SA unless otherwise noted.