Cadence was a DJ, a singer, dancer, and popular musical artist in Club Penguin Online. Her favorite phrase was , "It's time to dance!". She liked to call herself the "Dance Machine". She also owned a purple puffle named Lolz.

Like other mascots, she waddled around Club Penguin Online giving out free backgrounds. She also made the game Dance Contest. She showed up in the game and asked what difficulty you wanted, you could click on her to get to expert mode.

Cadence was known to be a bit of a girly girl. She seemed to act like an average teenager. She was a hip and cool penguin, and she used slang and acronyms. She was also very friendly and usually became friends with penguins pretty easily. She had an extreme fashion sense and loved clothes. It was also known that she was obsessed with music. Her favourite activities were singing and dancing. 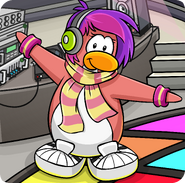 Default
Add a photo to this gallery 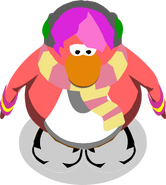 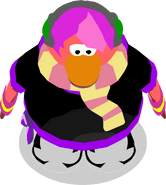 New in-game look
Add a photo to this gallery 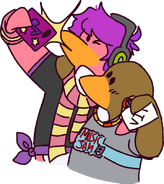 As seen in the Box Dimension during the 2nd Anniversary Party, along with the Music Jam T-Shirt and VIP Pass
Add a photo to this gallery
Retrieved from "https://officialclubpenguinonline.fandom.com/wiki/Cadence?oldid=107986"
Community content is available under CC-BY-SA unless otherwise noted.