Card-Jitsu Fire was a multiplayer game in Club Penguin Online, similar to the classic mini-game, Card-Jitsu.

Card-Jitsu Fire used the same cards as Card-Jitsu. The game was set at the Fire Dojo with two rings of stepping stones. The outer ring had an element painted onto each stone, and was also where the players stood. The inner ring had stepping stones with one side blank and the other side marked with a number. When it was a player's turn, the player chose a stone out of the stones in the inner ring (which were blank side up) and the stones turned over to reveal which number the player chose. Then the player moved that number of spaces around the outer ring.

Depending on which element was on the stone that the player landed on, a fire, water, or snow battle took place. Players all had to choose a card of the same element and the card with the highest value won. In addition, some stones were marked with a picture of two cards. This meant that players played a round of the original Card-Jitsu with one of their opponents. If a player landed on a stone occupied by another player, they played the original Card-Jitsu against that player. If there were multiple players on the tile, the player could choose which of the players they wanted to battle. The last space had all three elements on it. When a player landed on it, they chose whether to do a fire, water, or snow battle.

A player's score was measured by their energy level. All the players started with 6 points at the beginning, even Sensei, when you challenged him after you had earned your Fire Suit.

A player could gain or lose energy by:

In the possible (though uncommon) scenario where a penguin stepped onto a stone in the outer ring of a particular element and no penguin was able to play a card of that element, all penguins lost one point.

Players who won an element battle simply kept all their points, with no addition.

Instead of earning Card-Jitsu Belts, a player earned parts to complete their Fire Suit. Defeating Sensei would earn you the Fire Gem, making you a Fire Ninja. There were five parts to the suit. They were: 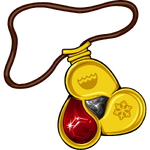 The Fire Gem
Add a photo to this gallery

Gameplay with Sensei
Add a photo to this gallery

Beating Sensei
Add a photo to this gallery

Leaderboard
Add a photo to this gallery

Retrieved from "https://officialclubpenguinonline.fandom.com/wiki/Card-Jitsu_Fire?oldid=109519"
Community content is available under CC-BY-SA unless otherwise noted.