The game took place on a river flowing towards a waterfall. Penguins were on tiles on the river and were trying to avoid falling into the waterfall behind them and be the first to reach the gong at the other end of the river. To reach the gong, players had to move across tiles in front of them, each was occupied by an element (fire, water or snow).

In order to create a path across the tiles, players had to first clear the tile they wanted to move to. They could do this by combating the element with a card of the opposing element. These opposing elements were the same as in Card-Jitsu (fire beats snow, snow beats water, water beats fire).

Players were dealt a hand of cards, as in Card-Jitsu and Card-Jitsu Fire. However, the deck dealt was large and was scrolling across the bottom of the screen, providing a rotating deck of cards. Players could select the appropriate card to throw onto a tile in front of them with an opposing element. The tile they wanted to move to had to be next to the tile they were on, although players were able to move forward, backwards, sideways or diagonally.

It is important to note that tiles may have had different sizes of elements on them (small, medium or large). In order to clear larger elements from tiles, players needed to select a card of the opposing element with a high number. Players could choose to use multiple cards of the opposing element to clear the tile. For example, a large snow pile may be cleared by using a 5-power and a 6-power fire card. Throwing a card of the same element as that on the tile resulted in the element becoming more powerful. This then required a larger power card to overcome it. This may have been used as a tactic to strengthen elements around an opponent.

Players won by being the first to reach the gong at the other side of the river. Once a player sounded the gong, the game ended and any opponents left on the river would be placed according to their distance from the gong. If two players were on the same row, the player closest to the left would be placed above the other. Falling off the river into the waterfall caused a player to automatically lose.

Instead of earning belts, a player earned parts to complete their Water Suit. Defeating Sensei would earn you the Water Gem, making you a Water Ninja. There were five parts to the suit. They are:

The Helmet of Oceans 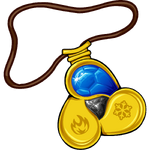 The Water Gem
Add a photo to this gallery

Gameplay with Sensei
Add a photo to this gallery

Beating Sensei
Add a photo to this gallery

Leaderboard
Add a photo to this gallery 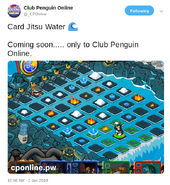 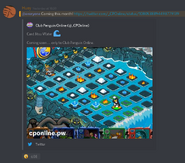 Timmy's announcement about Card-Jitsu Water in the Discord server 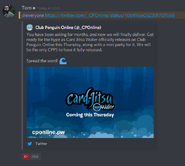 Riley's twitter announcement about Card-Jitsu Water in the Discord server

The promotional image announced on January 15, 2019

Retrieved from "https://officialclubpenguinonline.fandom.com/wiki/Card-Jitsu_Water?oldid=109520"
Community content is available under CC-BY-SA unless otherwise noted.