C1-10P, nicknamed Chopper, was an astromech droid, and an early member of the Rebel Alliance. He appeared at the Ultimate Star Wars Takeover, where players had to find ten batteries for him in Hera Syndulla's task.

Due to his advanced age and lack of consistent maintenance, Chopper developed a sarcastic, and cranky demeanor. While Chopper got on well with Hera, Kanan, and Sabine, he had a fraught relationship with Ezra and Zeb, whom he often played tricks on. Chopper had a respectful relationship with Hera because she rescued him from a wrecked Y-wing starfighter during the Ryloth campaign and adopted him. While he was always cantankerous, stubborn, and irritable, Chopper did have the crew's best interests in mind and would always help them during a problem, prompting his partners to forgive his personality quirks. Though he did not get along with the Ghost's computer, the Phantom followed Chopper's commands without question.

Chopper also had a mischievous and psychopathic streak which led him to sometimes endanger both sentient beings and other droids. On one occasion, he nearly caused the death of Ezra by knocking him off the Ghost in mid-air. Despite the incident, he showed no remorse and continued tossing jugs at him. Zeb suggested his personality flaws were due to damaged logic circuits. 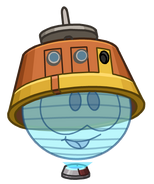 A helmet resembling Chopper seen at the Plaza during the Ultimate Star Wars Takeover
Community content is available under CC-BY-SA unless otherwise noted.
Advertisement