The Cloud Forest was a small mass of clouds and electric trees, located high in the sky, where the legendary Rainbow Puffles lived. Players could only access this room by flight or being launched and it could only be accessed in the New Client, as the only method of reaching the Cloud Forest was from a cannon on the Puffle Hotel Roof.

After completing a set of puffle tasks in the Puffle Hotel, penguins were able to launch from the cannon on the Puffle Hotel Roof, to the Cloud Forest, where they could adopt a Rainbow Puffle.

The Cloud Forest was considerably small for a forest, and was composed of both "normal" clouds and what appeared to be thunderclouds, which produced a constant crackling noise. There were a few gray trees with white leaves, which bared fruit. A rainbow river poured down off the side of the forest.

Hollywood Party
Add a photo to this gallery 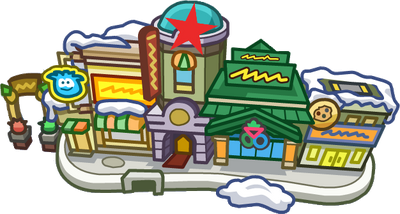 The Cloud Forest existed above the island, but could be accessed from the Puffle Hotel Roof
Retrieved from "https://officialclubpenguinonline.fandom.com/wiki/Cloud_Forest?oldid=113018"
Community content is available under CC-BY-SA unless otherwise noted.