A coin was the main currency of Club Penguin Online and it was used as a legal tender. They could be unlocked and obtained through mini games, competitions. Fluffy the Fish was engraved in all of the standard 1 coins.

You received 500 coins when you created a penguin. You could earn more by these ways:

Varying amounts of coins ranging from 1,000 to 15,000 could be unlocked from entering Codes.

Coins were earned by playing single or multiplayer Games. Almost every Game provided you with coins after playing, excluding Card-Jitsu, Card-Jitsu Fire & Water, Fair games (from The Fun Fair Party 2018 and 2019) . You could also receive coins by digging in the Gold Mine. The coins you earned in games was usually equal to 10% of your total score, and if you had all the Stamps for that game, then your payout was doubled, providing the game contained stamps.

Players could receive coins by answering trivia questions during a Mod Meet Up.

Players could earn coins and many other prizes by entering a raffle during Discord Giveaways.

Coins were earned by playing games and taking part in special activities, such as Igloo and competitions. Players could use coins to buy colors, Puffles and their supplies, clothes, Igloo Furnitures, and Player Card backgrounds. Coins could also be used to send Postcards.

A "ten" coin was shaped like a normal Club Penguin coin but was worth 10 coins. It was also larger than a normal coin. It could be found in games like Jet Pack Adventure, and could also be found when digging for coins in the Gold Mine. 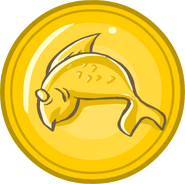 A coin, as seen in Puffle Rescue 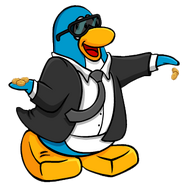 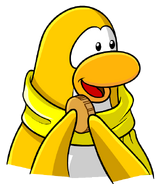 A yellow penguin carrying a coin

A purple penguin carrying a coin 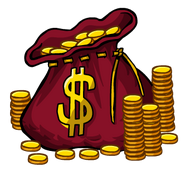 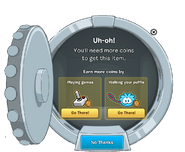 A pile of coins
Add a photo to this gallery
Retrieved from "https://officialclubpenguinonline.fandom.com/wiki/Coin?oldid=104944"
Community content is available under CC-BY-SA unless otherwise noted.