Commissioner Gordon, also known as James W. Gordon is a character from the DC Comics Universe. He was featured as a non-meetable character at the Batman Party. He gave out orders to penguins and guided them to catching all Arkham Asylum prisoners that escaped.

Of Scottish descent, Gordon had served in the United States Marine Corps prior to becoming a police officer. Gordon is at one point or another depicted as commissioner of the Gotham City Police Department. Gordon frequently contacts Batman for help in solving various crimes, particularly those committed by super villains. Generally it is Gordon who uses the Bat-Signal to summon Batman. Gordon is usually depicted with silver or red hair, eyeglasses, and a moustache. In most incarnations, he is seen wearing a trenchcoat, necktie, and on occasion, a fedora hat. He is also sometimes pictured with a cane, although it is not revealed why he uses it.

On December 10, 2019, Joker had kidnapped Gordon and has warned the penguins to trade all the villains captured in exchange or he would never be seen again.

Gordon's polaroid as seen in the case files 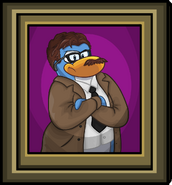 Gordon's portrait in the Gotham Museum
Community content is available under CC-BY-SA unless otherwise noted.
Advertisement