Gariwald VIII was rich, as he owned a very large mansion built by himself. Gariwald also owned a Puffle, and the puffle's color was likely white.

Gariwald VIII was born some long time ago, a descendant of Garugg the Ugg Ugg. His brother or sister soon had children, and one of those children had a son, Gary, making Gariwald Club Penguin Online's resident inventor's great uncle.

In October 2019, Gariwald finally came back to visit Club Penguin Online Island. He went to investigate strange happenings inside the Puffle Hotel. Eventually, though, when he was inside searching, the shapeshifting ghost Skip kidnapped him. Penguins then went to find him and discovered Skip's plan to capture Ghost Puffles and use their energy to haunt the island. However, Skip was defeated and Gariwald was finally freed.

Gariwald as seen on the Gary's Halloween 2019 Background 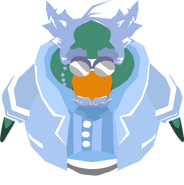 A portrait of Gariwald found at the Lodge Attic
Community content is available under CC-BY-SA unless otherwise noted.
Advertisement