Grumpunzel was a grumpy princess in the Stage play Fairy Fables. She was a peach penguin wearing the Beautiful Braid and a dress. In Fairy Fables she played as a Princess sitting in a tower waiting for the cookies to be delivered by Prince Redhood. When the Prince reached her, she was found in a trance. Once the Prince threw a snowball at her, she no longer was in the trance. She got mad at the prince. Even angrier when she heard that the prince brought her croissants. The princess told the prince that she asked for cookies, so Twee put her back into the trance. The prince then gave the croissants to the Big Bad Wool.

"Probably the grumpiest princess you've ever met. This diva has really long hair and a really short temper."

What Grumpunzel would look like on a Player Card 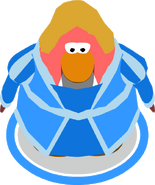