Hera Syndulla was the pilot and owner of The Ghost vehicle, and an early member of the Rebel Alliance. Penguins were able to unlock her costume at the Ultimate Star Wars Takeover.

A smart, tactful and highly observant individual, Hera could quickly detect a threat. Her personality was somewhat two-sided; while she exuded a no-nonsense style of command, she was also known for being a very warm and compassionate individual. As a highly capable pilot and captain, Hera took good care of her ship, as well as her crew. Upon meeting Ezra, Hera developed a sort of motherly bond with the boy as she had with the other crew members.

She was a true believer in the rebel cause and inspired hope in the rest of the crew. Hera was also in love with Kanan before getting in a romantic relationship with him, she was usually confiding in him and frequently called him "love". She was more than capable of putting her foot down when she saw conflict within the crew. While an adept fighter, Hera also cared for her crew and knew how to motivate them to reach a common goal. 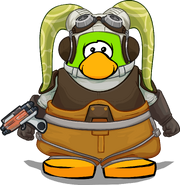 What Hera Syndulla would look like on a Player Card 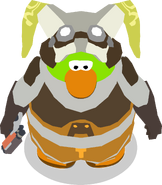 What Hera Syndulla would look like in-game
Community content is available under CC-BY-SA unless otherwise noted.
Advertisement