Kanan Jarrus, (born Caleb Dume) was a Jedi; the master of Ezra Bridger, and an early member of the Rebel Alliance. Penguins were able to unlock his costume at the Ultimate Star Wars Takeover.

During his youth, Kanan Jarrus (or rather, Caleb Dume) had a tendency to ask many questions, hoping to better understand things, which earned him somewhat of a bad reputation among his peers, but it was that inquisitive nature that motivated Billaba to choose him as her Padawn apprentice. Young as he was, he was also reckless, rushing headlong into danger. Any disrespect against his master would anger him, as did being called "kid." Another peculiarity was that every time he got nervous, he would run his hand through his hair.

A secretive man, Jarrus would rarely talk about his past, as he disliked talking about it, particularly before meeting Hera Syndulla on Gorse. Before her, Jarrus was reckless, impatient and belligerent. Seemingly prickly and detached, Jarrus showed his kindness and commitment to justice only when he thought no one was looking, and his only aim in life was survival, until he met Syndulla. She persuaded him to join her to fight for a lost way of life—to work as a rebel leader, for which he resumed his lost qualities of bravery, honor, and perseverance.

Kanan without the lightsaber 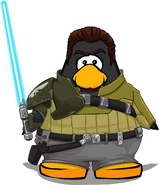 What Kanan Jarrus would look like on a Player Card

What Kanan Jarrus would look like in-game
Community content is available under CC-BY-SA unless otherwise noted.
Advertisement