Puffle Launch was a game in Club Penguin Online located at the Pet Shop or from the player's Igloo. The game's focus was launching Puffles in the air through cannons to collect Puffle-Os that "went missing". In addition, the player also had to fight Klepto, a crab who stole parts of various machines over the island, to continue collecting the puffle's famed treats.

Puffles owned by the player could be used in the game and were selectable when the game started. If the player had no puffles, a red puffle would be automatically used. Each puffle had their own unique helmet they wore. 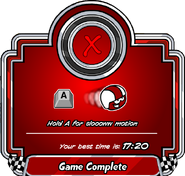 Special feature
Add a photo to this gallery

Retrieved from "https://officialclubpenguinonline.fandom.com/wiki/Puffle_Launch?oldid=113160"
Community content is available under CC-BY-SA unless otherwise noted.