Rockhopper (commonly abbreviated as RH, or referred to by his title, Captain Rockhopper) was a friendly pirate who visited Club Penguin Online parties or events with his red puffle, Yarr. He arrived on his ship, The Migrator, docking at the Beach, where penguins could explore the ship. Rockhopper kept a journal of his adventures, and sold rare items brought over from Rockhopper Island and other places in Rockhopper's Rare Items catalog on the Migrator. The Migrator was also the place where penguins could play the treasure finding game, Treasure Hunt.
There was also a stamp for meeting Rockhopper, see List of Character Stamps. 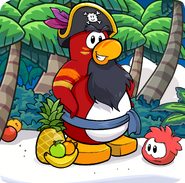 During Pirate Party 2018 and Adventure Party: Temple of Fruit 2018 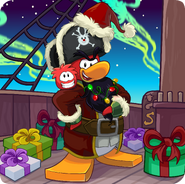 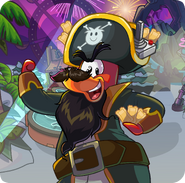 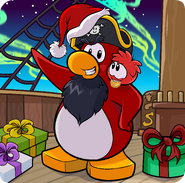 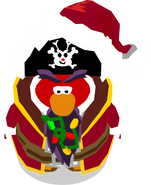 As seen in the Adventure Party 2018 Homepage

A portrait of Rockhopper as seen at the Lighthouse, New Client 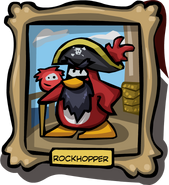 A portrait of Rockhopper and Yarr as seen at the Lighthouse, Old Client

As seen in the "Social Media" section in the new Homepage
Community content is available under CC-BY-SA unless otherwise noted.
Advertisement