Sabine Wren was a weapons expert, and an early member of the Rebel Alliance. Penguins were able to unlock her costume at the Ultimate Star Wars Takeover.

A free-spirited young woman with an artistic flair, Sabine Wren was driven by a desire to express herself artistically, and a fundamental distaste for following instructions she disagreed with. Despite her frequent feisty sarcastic quipping, she rarely let personal feelings get in the way of her job and remained focused on the objective at hand, though she still did her job with her unique artistic panache. She often graffitied different rebel insignias with her airbrushes every time they attacked the Imperials. 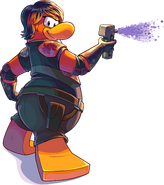 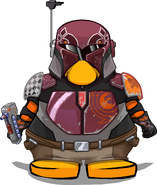 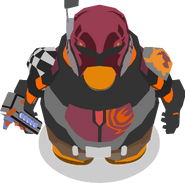 What Sabine Wren would look like in-game with the Mandalorian helmet on
Community content is available under CC-BY-SA unless otherwise noted.
Advertisement