The Servers were a software that allowed users to play the game. Once they logged in, players had to choose a certain server to join. They could then interact with any other user on that server.

Unlike the normal servers where players could chat freely, the Safe Chat servers featured a limited amount of words and phrases that players were able to say in-game. This ruled out the chance of players seeing swearing or inappropriate content, making the servers ideal for younger or sensitive users.

The first Safe Chat servers were introduced in April 2019.

The mature chat allowed players to swear/cuss without breaking rules or being banned, but it still advised them to follow the mature rules. It was that only players above the age of 18 should be using the mature chat feature.

In April 2019, the Mature servers were first implemented for a one week trial for each language, but were later removed. It later made a comeback in October 2019 for another one week trial with just the English server Walrus. On October 25, 2019 it was announced that the Mature Servers would be a permanent addition to the game.

The mature servers were only accessible from the New Client and could not be accessed via the Old Client. 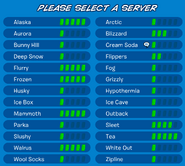 The Portuguese servers
Add a photo to this gallery

The icon apears in the server when one of your friends is online in it, in the New Client

The icon apears in the server when one of your friends is online in it, in the Old Client

Full servers icon
Add a photo to this gallery

Orange screen that appears before joining the Mature servers

The promotional image posted on Club Penguin Online's twitter, when the first mature server released
Add a photo to this gallery
Retrieved from "https://officialclubpenguinonline.fandom.com/wiki/Servers?oldid=113538"
Community content is available under CC-BY-SA unless otherwise noted.