The Ski Hill was a snowy hill in the northwest corner of the Club Penguin Online island.

There was a mini-game called Sled Racing , which had four different tracks. Bunny Hill was the easiest of them, followed by Express, Penguin Run and Ridge Run. There was also a Test Track, but it could only be used during the PSA Missions. It was also possible to buy different sleds through the Game Upgrades catalog.

Hollywood Party
Add a photo to this gallery

Medieval Party 2019 - After Scorn the Dragon King is defeated 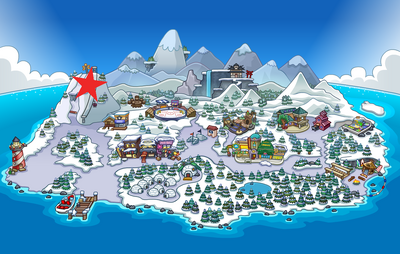 The Ski Hill was located to the West of the island
Retrieved from "https://officialclubpenguinonline.fandom.com/wiki/Ski_Hill?oldid=113101"
Community content is available under CC-BY-SA unless otherwise noted.