Thanos was the first custom mascot for Club Penguin Online, created for the Marvel Super Hero Takeover 2018 party. Due to his popularity with players, he visited during other events as well. His second main appearance was during the Marvel Endgame Takeover. The parties were celebrating releases of the Marvel cinematic saga conclusion films, Avengers: Infinity War and Avengers: Endgame, in which Thanos was the main villain.

Thanos was the powerful leader of armies, elite warriors, and assassins, most known as The Black Order which had destroyed and conquered many worlds. In the Marvel Super Hero Takeover 2018, Thanos' aim was to collect all six Infinity Stones in order to wipe out half the population of Club Penguin Online. Having succeeded, he returned in the Marvel Endgame Takeover to prevent the Avengers from collecting the stones to reverse what he had done. 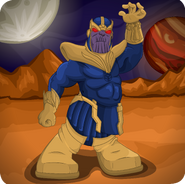