The Grand Inquisitor, or simply known as The Inquisitor, was a member of the Galactic Empire. He appeared at the Ultimate Star Wars Takeover, where Penguins had to battle him to unlock his costume.

A male Pau'an, the Grand Inquisitor adorned his face with dark side tattoos inked in the same shade of red as human blood, striking fear into targets and subordinates alike. He wore black armor emblazoned with the crest of the Galactic Empire and carried a red gyroscopic double-bladed lightsaber, using this type of lightsaber in order to intimidate his opponents. In particular, he was able to throw inexperienced Jedi off-balance. Because Jedi relied on balanced emotions, the imbalance gave the Inquisitor an edge in combat. Although he was a physical opponent for Jedi and tapped into the dark side of the Force, he did not appear overly emotional, instead operating as a cold and analytical mind. Whatever intensity he showed was a result of his purpose in completing his mission.

Through the dark side, the Grand Inquisitor was able to learn about individual Jedi and use their secrets against them. He studied the records of the Jedi Temple to not only identify Jedi but also have an understanding of their combat forms and traditions. His knowledge was extensive enough that he could identify who a Jedi was trained by and identify their fighting style in just a few seconds. He utilized this, like his lightsaber, to inflict an opponent with fear, which was his most powerful weapon against his enemies. Once in combat, he did not show mercy, having been tasked with judging and eliminating Jedi survivors. The Inquisitor had views that the Empire needed to purge itself of all weakness and regarded compassion as the most insidious weakness.

The Grand Inquisitor angry after losing in a Lightsaber Duel 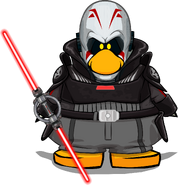 What The Grand Inquisitor would look like on a Player Card

What The Grand Inquisitor would look like in-game
Community content is available under CC-BY-SA unless otherwise noted.
Advertisement