This article is about Rockhopper's ship, The Migrator. Were you looking for the room, the Migrator?

The Migrator was the pirate ship piloted and owned by Rockhopper and his first mate, Yarr. Rockhopper sailed the seas in The Migrator, finding treasures to bring back to Club Penguin Online. The Migrator contained recurring party rooms that were only accessible during particular parties.

Parts of the Ship

The upper deck was the top part of the ship. While there was not much to see here, there was the ship's wheel, which provided control over the ship's movement. There was a door leading down to the lower deck, and a mast leading up to the Crow's Nest.

The Crow's Nest served as a lookout point for the ship, as well as a means of defense, through the Snow Cannon 3000. Yarr liked to be in the Crow's Nest and used his telescope, and often went up there.

The Ship Hold served as the storage for the entire ship, with many treasures being stored here. There was also a small shop, which allowed penguins to buy rare treasures from Rockhopper's Rare Items.

The Captain's Quarters was Rockhopper's personal room, where he made maps, planned treasure searches, and, along with Yarr, slept. To enter, penguins had to obtain a key from the back of a book in the Book Room. 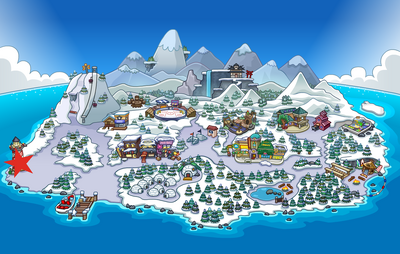 The Migrator is located at the Beach

Retrieved from "https://officialclubpenguinonline.fandom.com/wiki/The_Migrator?oldid=112892"
Community content is available under CC-BY-SA unless otherwise noted.