The Ultimate Star Wars Takeover was a party in Club Penguin Online. It began on February 22, 2020 and ended on March 7, 2020. It was based on the Disney XD CGI-animated television series Star Wars Rebels with bits from the original trilogy.

The Ghost's crew of the Rebel Alliance needed penguins help to fight against the Galactic Empire's evil regimes.

During the party Darth Herbert visited the island and penguins could obtain his new giveaway.

The motley group of rebels who live aboard the starship Ghost, have visited the Club Penguin Online island and need penguins help to succeed in helping to give rise to the Rebel Alliance as they fight against the evil Galactic Empire. Members are Ezra Bridger, a young orphan from Lothal who learns he can use the Force; Kanan Jarrus, a Jedi who survived Order 66; Hera Syndulla, a Twi'lek pilot and veteran resistance fighter; Sabine Wren, a Mandalorian explosives expert; Garazeb "Zeb" Orrelios, a Lasat warrior; and the cantankerous astromech droid C1-10P, also known as Chopper.

On February 22, 2020, Sabine Wren asked penguins for help to paint the rebel symbols over the Imperial posters by throwing snowballs at 8 of them at the Beach, Dock, Town, Plaza and Forest.

On February 23, 2020, Ezra Bridger told the penguins how it feels to prove themselves to the crew and to bring back 10 crates of fruit at the Beach, Dock, Town, Snow Forts, Plaza and Forest that the Galactic Empire stole.

On February 24, 2020, Zeb Orrelios tasked the penguins to throw snowballs at 4 defense towers to take them out at the Beach, Dock, Snow Forts and Forest so that the crew can fly their ship without getting hit.

On February 25, 2020, Hera Syndulla tasked the penguins to collect 8 droid batteries to keep Chopper running. They were located at the Beach, Dock, Town, Snow Forts and Plaza.

On February 26, 2020, Ezra Bridger informed penguins that Kanan Jarrus has been captured after talking to them on February 22, 2020. They had to fight an army of Stormtroopers at The Inquisitor's Base and rescue him.

After penguins finished all the tasks, they could obtain the Blue Lightsaber and a special Lightsaber Duel feature was available where they could have battled each other to unlock special prizes and later challenge The Grand Inquisitor to obtain his items.

The following items were available after the penguin reached a certain amount of points while playing Lightsaber Duel. Every item was worth 100 points = 5 wins with

points or 10 tied games with

The following items were available after the penguin defeated The Grand Inquisitor 3 times in a Lightsaber Duel. 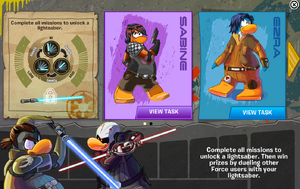 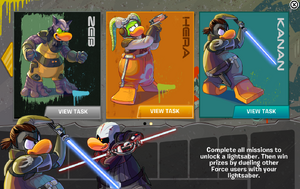 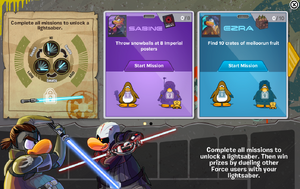 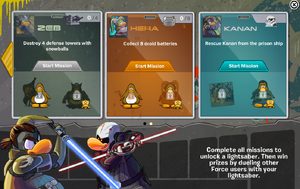 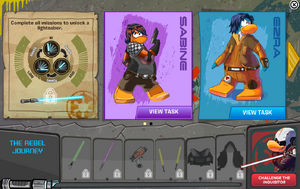 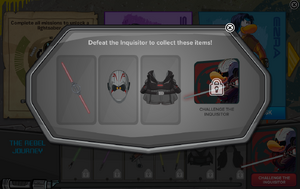 Kanan Jarrus greeting the player when logging in

Sabine Wren asking the player to help with her task

Ezra Bridger informing the player that Kanan Jarrus has been captured

Kanan Jarrus telling the player that it is a trap

Kanan Jarrus is glad he was saved

Defeating The Grand Inquisitor in a Lightsaber Duel

The Map during the party

The Homepage image for the party

Community content is available under CC-BY-SA unless otherwise noted.
Advertisement