Is Card-Jitsu Snow THAT Good?

As Club Penguin Online staff, there is one question we get asked more than any other:

When is Card-Jitsu Snow coming?

Our developer, Timmy, is currently working very hard on the game so that it can be released on Club Penguin Online and it seems that many players can't wait for it to arrive.

But is it really all that good? Let's discuss.

For those of you who can't remember, or who perhaps never played the original Club Penguin game, Card-Jitsu Snow is the third elemental Card-Jitsu game. In Card-Jitsu Snow, you must work with two other players to defeat evil snowmen and finally, Sensei's old friend (now enemy), Tusk.

At the start of the game, each of the players adopts an element (fire, water or snow) and you work together to defeat the snowmen. The game then starts, giving players options to move across the playing field (split into squares) towards the snowmen to attack.

The three players must win three rounds before the game is complete. There is also a bonus round that players may get to play. 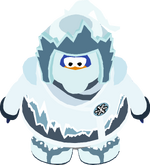 1. You can earn the Snow Suit

Like the other Card-Jitsu games, progressing as a Snow Ninja allows you to unlock Snow Suit items that cannot be obtained through any other means. You can also become a Snow Ninja, earning the Snow Gem.

2. There are a LOT of stamps

Card-Jitsu Snow gives players the opportunity to earn a LOT of stamps—far more than any other Card-Jitsu game. This is great for players who love to collect stamps.

3. It is an interesting game

Card-Jitsu Snow is more complex than other Card-Jitsu games and allows you to work with other Ninjas to defeat an enemy. In this way, it is quite interesting and does give a different game experience to all other games on Club Penguin Online as it is the only game where you can play with other penguins, rather than against.

Card-Jitsu Snow is BY FAR the longest Card-Jitsu game. It takes an awful lot of time to get through each round and so progress towards becoming a Snow Ninja is much more difficult and takes longer.

2. You are reliant on two other players

Because of it's collaborative nature, you are completely reliant on the two other ninjas you are playing with. Each player has different and important abilities, so in order to win, EVERY player must understand exactly what they are doing. Because of this, if you get stuck with someone who doesn't know how to play or just makes bad decisions, your whole team will suffer for it. You also can't communicate with the other players AT ALL, so it is really hard to coordinate what you are doing as a team.

Not only does the game take such a long time, it is actually really rather difficult to win. Even if every player is good and plays their role well, it is still hard to win the game.

4. Some of the stamps are really difficult

Although there are a lot of stamps, some of them are really difficult to get.

5. The game is often buggy

Even in the original Club Penguin, Card-Jitsu Snow often had a lot of bugs and glitches. This is due to the complexity of the game and explains why it has not featured on Club Penguin Online yet.

My opinion is that Card-Jitsu Snow is not a very enjoyable game. It is too hard to win and you nearly always get stuck with someone who doesn't know how to play their element and lets the team down. I think this is quite an unpopular opinion as many people are anxious for the game to come to Club Penguin Online.