With the release of the new Penguin Style and Furniture catalogs, many penguins are trying to guess what the next party will be on Club Penguin Online and Riley has given us some big hints!

When releasing the 2MILLION700 Code, Riley released a tweet reminding everyone of the huge custom party coming to Club Penguin Online in May (to read about this party, check out the blog post here). However, Riley ended the tweet with #Endgame, perhaps hinting that the next party will be themed around the latest Marvel film, Endgame.

The release of the catalogs a few days ago has also fuelled suspicions that the next party will be Marvel-related. The Penguin Style is particularly Marvel themed, allowing players to buy many superhero costumes. 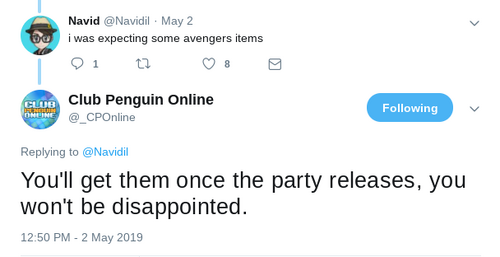 The second tweet came from a user asking why Club Penguin Online had decided to host the Music Jam 2019 party instead of hosting the Endgame party when the film came out. Riley replied stating that they could not design the party until staff had seen the film and that they wanted to give players enough time to watch the film so that the party would not spoil them. 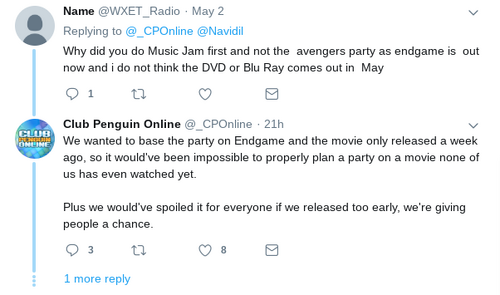