Garazeb Orrelios, or simply Zeb, was a highly-trained warrior, and an early member of the Rebel Alliance. Penguins were able to unlock his costume at the Ultimate Star Wars Takeover.

Haunted by his people's near extermination, Garazeb Orrelios adopted a gruff and agitated persona, quick to fits of rage and violence. Behind this outward guise Zeb was actually a compassionate being who cared a great deal for his fellow members of the Ghost, and for people affected negatively by the Empire.

Zeb had a strong sense of morality, and he implored Kanan not to sell disruptor rifles. He used his considerable combat skills to defend helpless citizens oppressed by the Empire, and even declined money offered to him for doing so. Despite his essentially good heart, Zeb was quick to anger and rash actions which often got him into trouble. 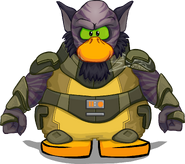 What Zeb Orrelios would look like on a Player Card 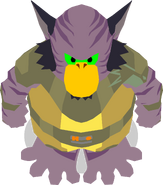 What Zeb Orrelios would look like in-game
Community content is available under CC-BY-SA unless otherwise noted.
Advertisement